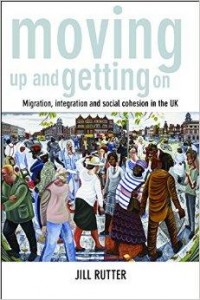 “This is an essential book for policy makers. Based on a decade’s research it offers rigorous analysis and practical solutions” Barbara Roche, former Minister of State for Asylum and Immigration

“This book takes an important step forward, rejecting simplistic ideas about ‘integration’ and by recognising that cohesion revolves around the ability of all people – not just migrants – to manage conflict and change. Jill Rutter also suggests practical ways in which societies can invest in this learning process.” Professor Ted Cantle CBE, The iCoCo Foundation

Listen to me to talk about Moving up and getting on.

Today the UN estimates that one person in 25 is a long-term resident outside the country of their birth and is thus defined as a migrant. In most developed countries migrants have become a demonised population and border control is high on the political agenda. Yet what happens to migrants after their arrival in a new country – integration – has received less attention. But economic and social integration matter. The failures of integration and social cohesion in the form of unemployment, educational under-achievement, social segregation and conflict are damaging to migrants and receiving communities. Conversely, integration and social cohesion, when achieved are an important part of equipping communities to cope with immigration.

I have spent nearly 25 years looking at migrants’ experiences at work, in education and in their new neigbourhoods. Moving up and getting on draws from my recent research, In London and the east of England. The book aims to be an accessible but comprehensive text that critiques recent policy, but also suggest practical steps to support integration.

A lack of conceptual clarity about the nature of integration and social cohesion has been a feature of the last 25 years and has also hindered policy. With this in mind, I argue that an essential pre-requisite for successful integration and social cohesion policy is a clear understanding about these conditions and the role of the state in promoting them. I review theoretical and policy-focused definitions of integration, before putting forward my own choice – that integration is the capability of migrants to achieve social inclusion and wellbeing. Such capabilities are achieved by possessing English language fluency, for example, and the type of work that supports social mixing. The book examines ESOL policy, which is characterised by inconsistences, with a lack of courses in rural areas and for working migrants. Workplace and housing market conditions also have a large impact on integration and social cohesion. Moving up and getting on argues for policy-makers engage with the private sector, particularly with employers and landlords and to encourage integration though better housing regulation and incentives.

Social cohesion has seen shifts in the way that governments understand this condition. I believe that social cohesion is the ability of people and places to manage conflict and change. Moving up and getting on argues that meaningful social contact between migrants and others essential in managing tensions associated with migration. Meaningful social contacts takes place in ‘transversal spaces’ which may include workplaces, schools, high streets, cafes, open green space, leisure centres, arts organisations, informal associative circles such as allotments as well as political and civil society organisations. The book looks at interactions in a park, allotment, children’s centre, workplace and online forum. The state has a limited capacity directly to influence everyday social interactions within transversal space. But government does have the ability to ensure sufficient transversal space and make it conducive to meaningful social contact.

The nature of immigration to the UK has changed in the last 25 years, with much more short-term migration, which presents particular changes for integration and social cohesion. Moving up and getting on argues that policy has to be more responsive to changing migration flows.

The book covers many themes and makes recommendations that touch on a wide range of policy areas. While I highlight problems, I feel the book has an optimistic message. Migration can work for the UK, but effective integration and social cohesion policies are needed for this to happen. Yet hostile national debates about migration are undoubtedly limiting the space for central and local government to act to improve integration and social cohesion. If some of the suggested policies are to be advanced, the nature of the immigration debate needs to change. This is a long-term project – sentiments about immigration will take many years to shift. But the challenging nature of changing attitudes should not be used an excuse for giving up on this task. All of us who are concerned about migration and social justice need to be courageous enough to confront these attitudes, in all their complexities.

A big thanks to Ed Gray for the book’s cover image ‘On Camberwell Green (Let me eat my wings!)’. I saw it in a gallery in the area where I did some of my fieldwork. I liked it as it seemed to encapsulate some of the themes of the book.

part one: Setting the scene

part three: getting on: social cohesion, conflict and change

part four: developing the capabilities of people and places

Moving up and getting on: Migration, integration and social cohesion in the UK is available from bookshops, online or Policy Press www.policypress.co.uk