One of the most unpleasant items of political merchandise I have seen is the Labour Party’s immigration mug, produced for the 2015 general election. Mass-produced, there are red and red-white versions in circulation. Each bears the slogan “Controls on Immigration” which was one of Labour’s of six electoral pledges. (The party set them out together on the infamous ‘Ed Stone’.) At one time there were five other siblings of the immigration mug, with promises about the economy, NHS, affordable housing and so on. All of them have now been removed from the party’s website, although you can still buy the Green Party’s riposte: a mug that bears the slogan “Standing up for Migrants”.

The immigration mug is ugly in every respect. Heavy and cheap, I cannot imagine giving it to a guest in my home. For me, the immigration mug symbolises the mess that the Labour Party has got itself into when on migration. Its production caused dissent within the party and an opportunity for a hostile media to present the party as divided. The mug was also an example of ‘talking tough’ on immigration, which I examine in my book. Making tough sounding statements can reinforce views that that immigration is a problem in the eyes of the public, which, in turn, forces politicians into making ever more uncompromising and undeliverable pledges.

The immigration mug made me think if there were ceramic drinking vessels that gave a more positive and different message about migration. Certainly, industrial and studio ceramics have benefited from the contributions of migrants. Helen Pincombe, Gabriele Koch and Poh Chap Yeap are potters whose work I like and whose country of birth lies outside the UK. Then, of course, there are Hans Coper and Lucie Rie, two of the greatest, both of whom fled the Nazis. Elsewhere on this site, I write about Abdo Nagi, born in Yemen and who took up ceramics after moving to the UK.

Helga Gamboa’s work is interesting. Born in Angola in 1961, Gamboa now lives and works in the UK. She produces vessels whose shape makes reference to traditional African forms. Gamboa’s pots combines burnished and low-fired clay with tin-glazed sections that use printed transfers. The marrying of the traditional African material with European tin-glaze and transfers suggests encounters between different cultures, although not mixing or integration. The documentary images used in some of her work also have strong political references, particularly to the injustices and violence of colonialism in her home country.

Studio ceramics also benefitted from the emigration of British potters. Without the years Bernard Leach spent in Japan and China (1909-1920) we would not have had his pots and his leadership of the early studio ceramics movement. Leach’s student Michael Cardew spent much of his adult life working in Ghana (1942-1948) and Nigeria (1951-1965). The influence of African village potters can be seen in the forms and colours in much of Cardew’s later work.

Many immigrant and emigrant studio potters made cups and mugs, so a stylish Rie vessel might well be a good choice for an alternative immigration mug. Richard Miller is one of the few ceramic artists who has specifically made vessels about migration. He is well-known to some of us through reality TV as he was the technical adviser for the BBC’s Great British Throw Down. Miller runs Froyle Tiles but also makes wheel thrown stoneware. Some of his work is decorated with illustrations that refer to his family’s and wider UK immigration history. He is of Welsh and Guyanese descent – his father served in the British armed forces – and the cobalt blue motifs on his pots reflect his heritage.

But I have selected another blue and white vessel as my alternative immigration mug. This pot is 18th century and far older. 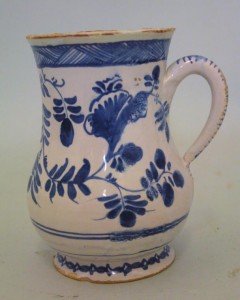 My alternative immigration mug is hand-painted Liverpool delftware. My choice has not been produced by one artist-potter, rather it is the work of a number of artisans who prepared the clay, threw the pot, gave it a first firing, applied tin glaze and left it to dry. Before its final firing the mug was hand-painted with blue cobalt oxide, a technique that requires great skill as the dry powdery surface of the pot quickly sucks all liquid out of a paintbrush. (I’ve done this with much less graceful results than the person who painted the little blue mug). The blue mug is ordinary and everyday, but also unique in its decoration.

The arrival of delftware in the UK is a story of migration. The term delftware is applied to tin glazed earthenware, where decorations are painted on top of the glazed surface prior to a glaze firing. Similar glazes and techniques are used in faienceware from France and Germany and majolica from Italy. Delftware probably had its roots in Abassid Iraq (750-1258) where it was discovered that the additional of tin oxide to lead-based glazes gave a strong and bright satin white. The technique of applying oxide decorations on top of tin glaze then spread through the migration of potters to Egypt, Moorish Spain, across Europe including the Dutch town of Delft, and then to England.

There are records of two Flemish potters, Jasper Andries and Jacob Jansen, producing delftware in Norwich in 1550. But most English delftware was made in the 17th and early 18th centuries, with London, Liverpool and Bristol being the main centres of production. The first pots were decorated in blue, but later other colours were used. Delftware owed its popularity to its similarity with white Chinese porcelain, but was much more affordable.

The origins of English delftware lie in the migration of artisan potters who took their white tin glazes on journeys through the Middle East and Europe. This led me to choose the little blue mug as my alternative to Labour’s. It illustrates the transfer of ideas and technology through migration, a process that takes place in many different arenas, and from which all of us have benefited.