Among potters, glaze recipes can be like the instructions for making Grandma’s Madeira cake. Perfected over many years, some families are more than willing to share the recipe.  Alternatively, the ingredients and procedures are a closely guarded secret. “I’ll email it to you,” your neighbour says, but the promised message never arrives. It is the same with potters and glaze recipes: some share and some will definitely not.

Glazes have other similarities with Madeira cake – they are difficult to get totally right. Many factors determine what you take out of the kiln: the balance of ingredients in the glaze, a contaminated mixture, the thickness of the glaze and its interaction with different clay bodies, firing temperature, and the position in the kiln are but a few. The atmosphere in the kiln will also affect the glaze and different effects will also be achieved if the pot is fired in ‘reduction’ in a fuel-burning kiln, compared with a firing in an oxygen-rich atmosphere of an electric kiln.

Beginners will use college glazes, which are a mixture of commercial products, their tutors’ own recipes and those taken from books. But after a while, many students will start to experiment and develop their own glazes, like cooks, often adapting and personalising others’ recipes. I am at this stage and have been trying to make a satin-like electric blue glaze. It is a recipe that uses cobalt as a colouring oxide and magnesium-rich talc to achieve a surface that is neither matt nor shiny. I have not yet got the result I want yet, so more weighing and test tiles are needed. This process of trial and error involves both art and science and I derive some satisfaction in using the knowledge gained in chemistry and geology classes nearly 40 years ago.

Glazes are essentially a mixture of three or four different types of chemical: silica, alumina, a flux and colouring oxides or stains. Silica – SiO2 or silicon dioxide – forms the glassy surface of the glaze when the pot is heated in the kiln. Sources of silica include clay itself, wood ash and feldspathic minerals and, in purer form, quartz and flint. Alumina is needed to stiffen the glaze, moderate its expansion and contraction and to prevent the glaze running off the pot. Clay and feldspars are again a source of alumina. Fluxes lower the melting temperature of the glaze. Many materials act as fluxes and those commonly used in stoneware and porcelain glaze include limestone (whiting), dolomite, calcium borate as well as barium carbonate, which also increases the intensity of colours. 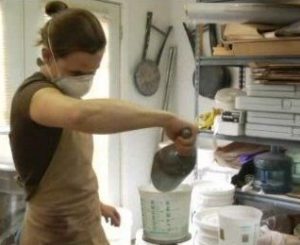 Oxides and commercial stains are used as pigmentation in glaze bodies, although colour can also be achieved through the use of slips, underglazes paints and pencils as well as in over-glaze paints and decals. Many oxides and glaze stains will burn out at the higher temperatures of a porcelain or stoneware firing. For this reason, earthenware glazes, fired at 1,000-1,100 C tend to be brighter, with stoneware colours more subtle and muted.  Cobalt oxide and carbonate give a strong blue colour. Copper carbonate produces a brilliant turquoise in an alkaline glaze, but chromium oxide turns a glaze deep green, although when mixed with tin oxide in a calcium rich glaze, this oxide turns a delicate pink.

Today, most potters order the ingredients of their glazes online from commercial suppliers.  These dry powders are weighted carefully, mixed with water and sieved, rather like making a cake. As with baking, too, potters follow a recipe, either their own, or that of a fellow potter. Most recipes list the main raw material as a percentage by weight, with oxides and stains added on afterwards. Here is a recipe for a delicate pink glaze developed by Linda Bloomfield, a scientist (and expert in semi-conductors) turned potter and author. She uses expensive rare earth oxides – neodymium and erbium – in some of her glazes to achieve delicate pastel colours.

Bloomfield has developed and tested hundreds of glaze recipes, following the footsteps of pioneer studio potters whose numbers include Katherine Pleydell-Bouverie (1895-1985). After an apprenticeship with Bernard leach, she set up her own pottery in the grounds of her family estate in Berkshire. Here she perfected ash-glazed pots, the surface of which have real depth and beauty. She kept extensive records of her glaze experiments, with some of her notebooks now held in the Craft Study Centre archive at Farnham.

Once they are satisfied with a recipe, many professional potters will stay with it. Edmund de Waal is famous for his cylinders of pure white Limoges porcelain. But it is not the shape or whiteness I admire, but the delicacy of his glazes. They are almost always clear and glossy, but never flat and lifeless.  Most of his glazes are transparent to highlight the white of his porcelain, but he has also perfected a delicate green-blue celadon glaze. Here the colour has been achieved by iron oxide in the mixture, followed by reduction firing in a gas kiln.

De Waal’s translucent cylinders represent an extreme of minimalist glaze application. But like cake ingredients – butter, sugar, eggs, flour and flavourings – a limited range of glaze ingredients offers endless possibilities. The excitement of taking a pot out of the kiln, too, has similarities with opening the oven door after baking. With our application of science and art and our recipes, scales and ovens, potters and cooks have much in common.