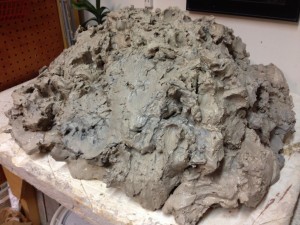 In the beginning was clay. While the oldest known ceramic objects date back to about 25,000 BCE, the story of clay goes back many millions of years before this, to the dawn of time and the formation of the rocks from which our pots are made.

Four thousand million years ago, the Earth was a spinning mass of liquids and gases. It is hard to comprehend this now, as I sit at the wheel in safe, green and temperate England. Eventually this material cooled and formed layers, some of which solidified to form the earth’s crust. As the temperature of this outer layer dropped further, the silicon and aluminium-bearing minerals began to crystallise and form igneous rocks. Lovers of Britain’s upland landscapes will be familiar with the best known igneous rock: granite.  Essentially, this rock is a mixture of quartz, shiny mica and feldspar crystals. Different types of feldspar, different combinations of these constituent minerals and the presence of other compounds result in different types of granite.

The clay that surrounds us, in our bathrooms, kitchens, sitting rooms or the brick walls of our houses, has its origins in the granite that lies under much of Britain and occasionally rises to the surface. I feel that my time learning chemistry and geology (and physics) was not wasted. I understand centrifugal forces and I realise why I struggle to centre the clay. I know the constituent elements of clays and glazes.

Strictly speaking, clay is not a single mineral. Rather, it is defined by its particle size and varies in its chemical composition. Rub any smooth clay such as porcelain between your fingers and you will get a sense of the size of its particles. These are much smaller than silt, generally less than 2 microns in diameter, pounded down to this size by the power of the elements. Over millions of years the action of wind and water broke down the Earth’s granite crust into its original crystalline components of quartz, mica and feldspars.  Quartz is silica, or to give the material its chemical name, silicon dioxide (SiO2), was then further pulverised to make sand. In some parts of the world, famously in south east China and Cornwall, further erosion leached the potassium, sodium and calcium out of the feldspars, leaving white china clay or kaolinite behind. It is an alumina and silica crystalline combination – Al2O32SIO22H2O – with a tetrahedral sheet of silica linked through oxygen atoms to an octahedral sheet of alumina.

Kaolinite, is the mother clay, the progenitor of our ceramics. It is known as a primary clay which means that it has stayed at its site of formation. Pure white and precious, it is the main ingredient of porcelain. All of its descendants contain impurities which give each pottery clay a different character.

Look at the pots in a national collection or county museum and you become aware of the many varieties of clay: coarse yellow Bronze Age funeral urns, smooth red Samian ware, brought by the Romans from France, medieval brown earthenware tiles, cream coloured tobacco pipes, Wedgwood’s black Basalt ware, or from further afield the purest, whitest Limoges porcelain. A supplier’s catalogue will further confirm the diversity of pottery clay.

Each seam of clay is unique in its composition, colour and character, which explains why early studio potters sometimes struggled to find a cooperative clay. As well as varying in the proportions of kaolinite, clays from different locations will contain different amounts of other alumina and silica-based minerals, most commonly illites, chlorites, sepiolites and smectites.

Clays rich in smectites are sometimes known as expansive clays, because this group of minerals has the capacity to expand and contract as it absorbs water. Like kaolinite, clays with a high proportion of smectites have a degree of plasticity, meaning that its structure hold water and become plastic. This quality enables the clay to hold its shape when subject to the forces exerted by the wheel. Potters sometimes knead extra bentonite – a type of smectite – into their clay to increase its plasticity and ease of throwing on the wheel. Potters who make sculptural forms or hand built vessels are less interested in plasticity, but need their object to hold together without cracking. Potters overcome this problem by adding sand or ‘grog’ to their clay mixture – grog is pre-fired clay that has been ground into sand-sized particles.

So the object that a potter wants to make influences the type of clay that he or she chooses. As a beginner at school, my first objects were made in red earthenware clays.  Now I mostly work in stoneware. Each is a different type of pottery clay and stoneware is fired at higher temperature,

Earthenware clays are fired to about 1,000 Celsius, a sufficiently high temperature to melt suitably formulated glazes, but not high enough to vitrify the clay – turning it into hard and non-porous stoneware. Both stoneware and porcelain are fired at a higher temperature – usually between 1,250 Celsius and 1,300 Celsius – causing the clay minerals to fuse and become impermeable.

Some 25,000 years ago, or maybe further back in pre-history, another human being looked at his or her stained hands. This person enjoyed making figures out of the red river mud, fashioning lions, rhinoceros and mammoths. Usually, these animals were left to harden in the sun, but they remained fragile. Understanding the effect of a cooking fire on the surrounding earth, this Stone Age man or woman placed one of these figurines in the flames.  My life is immeasurably different from this unnamed human being, but we are still united by one thing – the joy of baking the earth.