It is fun to attend auctions of contemporary ceramics and occasionally I have picked up the work of well-known potters – a bowl of Hamada Shoji, for example. I first encountered the work of Abdo Nagi at an auction; alas his work was outside my budget. I knew nothing about this potter before the auction, but later research revealed an extraordinary life story.

Abdo Nagi Abdullah Kaid was born in a village in Yemen’s Ibb Province. This mountainous area is in the south of the country and distinguishes itself by being the wettest place in Arabian peninsula. As a child, Abdo Nagi tended his father’s goats and received little formal education until his teenage years. A trip to a provincial town made him realise that there was a world outside his village which he was determined to see. After failing to persuade his father to release him from the farm, he packed a few belongings and set off by himself to Aden, shortly before his 12th birthday.

The boy’s first years in the then British colony were spent working as a servant for Arab families. Later he was employed by a number of British households, who encouraged his education. As the British prepared to withdraw from Aden, Abdo Nagi pressed his then employer, John Ireland, to take him back to the UK. Abdo Nagi arrived in this country in 1967 and was joined by his wife in 1971.

Abdo Nagi’s first years in England followed the same trajectory of many new migrants: long hours of low-skilled work, accompanied by college study and a certain amount of serendipity. For Abdo Nagi, employment was a job in a Wimpy Bar, but the purchase of a box of watercolour paints inspired a latent interest in art. Between 1971 and 1973 he obtained O and A Levels in art at a further education college in Hertfordshire. Later he found a job as a technician in the art department of another further education college. Still painting, he soon found himself working in the ceramics section. Here he realised that through clay he could reproduce the forms, textures and colours of the buildings and landscapes of his native Yemen. Within two years he was exhibiting is work and in 1988 he graduated with a BA degree from Middlesex University. Exhibitions and international recognition followed his degree, and his work as bought by ceramics enthusiasts such as Cyril Frankel and David Attenborough. 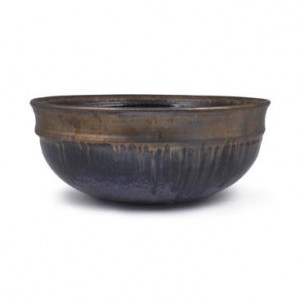 The clay and glazes Abdo Nagi uses make reference to the skies and buff-hued stony mountains of Yemen. He also uses wonderful dry turquoise and royal blue glazes in later work, which invoke the colour palate of mosque interiors. His blue and turquoise edged bowls of this period also remind me of those of Lucie Rie

Sadly, Abdo Nagi died suddenly in 2001 at a comparatively young age, and a ceramic talent was taken from us. But his life story is inspiring in many ways, as the story of a determined and hard-woring migrant who followed his dreams and went on to make great pots.

(A longer biography has been written by John Ireland, his former employer. Google images will show you many more pictures of Abdo Nagi’s pots.)