We can narrate the history of London in many different ways: through its buildings, written records, and the oral accounts of the capital’s people. The development of London can also be told through the medium of clay, and the ceramic objects of past residents. When the tide is out, the muddy strand near London Bridge will reveal fragments of pots and tiles that tell a full 2,000 years of London’s history.

Walking along the Thames foreshore is not for faint-hearted. The strand is slippery and littered with unsavoury detritus. London’s creaking sewage system also discharges its waste into the Thames when it rains heavily. But anyone interested in ceramics might well enjoy Clayground Collective’s Thames foreshore walks, where the participating mudlarks are accompanied by the archaeologist, Mike Webber.

Braving the microbes and warnings of Weil’s disease, it did not take long to locate the ceramic remains of past Londoners.  My first find was a piece from a salt-glazed beer jug – brought to London by Hanseatic traders, probably in the 16th century. The orange-pitting that is characteristic of salt-glazing – where handfuls of salt are thrown into the kiln – can been seen on the outside. On the other side of the shard, the potter’s throwing rings are visible.

I soon found some Romano-British shards, including a roof tile and a blackened tile from a hypocaust – the underfloor central heating system of Roman villas. I also found a tiny sliver of incised Samian ware, the shiny brick-red tableware of the Roman period. Most Samian ware used by Londoners was made in Gaul (France), although there were small-scale producers in the south east of England. Its sheen is not due to a glaze, rather the application of terra sgillata, made by mixing red clay into a very thin liquid slip, leaving it to separate out, then painting the finest particles on the pot as a layer of terra sgillata. (The same technique is still used in some low-fired African pottery).

A stretch of beach near London Bridge yielded a particularly rich pickings. Here, hundreds of clay pipe stems were visible. Clay tobacco pipes were part of everyday life in the 17th century, lost favour when snuff gained in popularity, then came back into fashion again in the 19th century. As they were fragile, many of them ended up in London’s waste disposal system – the river. Household waste, which included broken crockery, was also used as infill when wharves were built along the riverside. Hundreds of years later the fragments once cleared up by servants now wash up along the foreshore.

The north bank of the Thames backs on to the City of London – Roman Londinium. Although London experienced a period of decline after the Romans left, by the 10th century it was a thriving trading port again. By 950 it had a population of about 10,000, most of whom lived within the old Roman walls or just west of them. It is for these reasons that the shards that we picked from the Thames included those that date back to the Romano-British times, then skip 600 years or so to the early medieval period.

My medieval discoveries included an unglazed jug handle and a fragment of a wheel-thrown green glazed vessel, probably 13th century. Our shards can be dated in various ways, by looking at the clay from which they were made, its firing temperature, the form of the vessel, its decoration and the quality of the glaze. Before the Norman Conquest, medieval pottery made in the south east of England was hand-built and unglazed. Glazed items were in use, but only by those rich enough to buy pots imported from the continent. By the late 11th century, London’s potters began to experiment using glazes made from materials such as sand, soda ash, wood ash and galena (a lead ore used to aid melting). Glazes add a protective water-proof layer to low-fired earthenware, although many medieval pots were only glazed on their interiors.

The green glaze on my early medieval shards has been obtained by adding copper filings to a basic lead glaze mixture. By Tudor times, technology had improved, with green glazes stronger and applied more evenly. As time progressed, more colours were added to the potter’s palate, including the characteristic cobalt blue of tin-glazed delftware. I found an early hand-painted delftware shard, probably 17th century.

Between 1800 and 1900, London’s population grew from 1 million in 1800 to 6.6 million a century later. As might be expected many of my finds were from the 19th century. The included fragments of a paste jar and a clay lemonade bottle, as well as salt-glazed Doulton drainage pipes. The latter items were produced in great quantities for Joseph Bazalgette’s project to build London an efficient sewage system.

My 19th century treasures also included a shard from tissue-printed willow pattern tea plate. This technique was a mainstay of much Victorian mass-produced tableware. A design was etched into a copper plate, which was then inked-up with under-glaze colours. The plate was then passed through a press to transfer the design on to soaped tissue paper.  The sticky print was then placed down on to a biscuit-fired pot and rubbed with a stiff brush before being moistened. The water loosens the paper to reveal the design, which is then fired to about 600 Celsius to fuse the colour to the pot’s surface. The vessel is then glazed and re-fired. This technique was developed in the mid-18th century and became the main means of transferring a design to industrial tableware until about 1950. Tissue printing has now been superseded by the use of ceramic transfers, a speedier process. Yet tissue-printed tableware has a subtle quality, particularly where blue cobalt underglaze is used, which bleeds delightfully into the glaze.

The River Thames treasures are now in a vitrine, and are as precious to me as the unbroken pots in my collection. Their magic lies in the stories I construct about them, stories about who made them, who used them and how they were broken. I run my fingers across the throwing rings of my green Tudor shards and wonder about the life of the potter that made this vessel. When I retrieved these green slivers from the mud, I may have been the first person to touch them for 500 years, since the pot was broken.

Finding fragments that are so old was thrilling, although my excitement was dashed when one shard that I though was medieval turned out to be piece of asbestos. I found roof tiles blackened by the soot of the Great Fire of London. But the highlight of the walk was finding a floor tile, impressed with a dog’s paw print. I am not sure if it was Roman or Tudor, but it made me think back to my school days and to Cerberus, the loyal guard dog of Caecilus, the paterfamilias featured in the Cambridge Latin Project books that I studied. I wonder if this dog had a name, or was a just a stray who was cursed by the tile-maker. 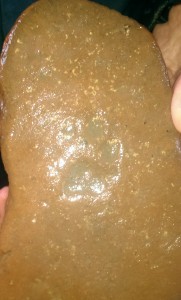