I was born in December 1959 in Birmingham and grew up in rural Northamptonshire. I attended a state school, and later St Anne’s College, Oxford and University College London’s Institute of Education. I had a great deal of fun during my university years, but I also became politically active – these were the early years of Thatcherism and the Miners’ Strike. I joined the Labour Party and gave some of my time to a student campaigning group that is now called People and Planet. 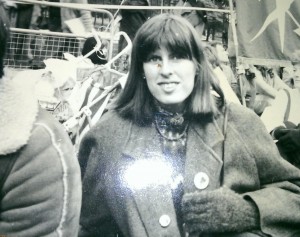 After university I spent some time working on a development project in Andhra Pradesh, India. But my time in South Asia enabled some reflection about poverty, its causes and my role in campaigning for social justice. I made the decision that I could have greater impact through political action in the UK, my home country. I returned to London, took a post-graduate certificate in education and spent nearly five years teaching geography in secondary schools in east London and Essex.

Teaching is a job that cannot be done in half measures and in 1989 I was exhausted and decided to take a break. From then until 2001 I was employed as a policy officer at the Refugee Council. It was during this time that asylum applications increased and migration rose up the political agenda. I mostly worked on education policy and wrote a number of books for teachers and for children. I helped set up Refugee Week, now a regular fixture every June. I also started my doctorate and had two children in the 12 years I spent at the Refugee Council.

In 2001 I moved to London Metropolitan University to set up a teacher training course in citizenship education. This new subject became a compulsory part of the national curriculum for 11-16 year olds in 2002. It aims to help students understand politics, and give them the skills to participate in democratic life. It was immensely exciting to be part of this new initiative and to teach some inspiring students.

My research activity at London Met focussed on migration. I undertook a study of the Congolese in London and made my first visits to the east of England, an area receiving many new arrivals from eastern Europe. In 2006 Refugee Children in the UK was published by Open University Press, my first single-authored research monograph. The book looks at refugee children’s experiences of secondary education and factors that influence their achievement.

The ivory towers of academia were followed by three years at the Institute for Public Policy Research (IPPR), a left-of-centre think tank. I was employed as a senior research fellow in migration. Most of my work focused on integration and public service responses to migration flows and this website links to some of my reports that I wrote at IPPR.

A legacy of my three years at IPPR is the Migration Museum Project, where I am a trustee. At IPPR we undertook a short piece of research that examined whether the UK needed a permanent museum of migration – an Ellis Island for this country. The answer was an emphatic yes and since 2009 a group of us have worked to take this idea forward. The Migration Museum Project plans to create the UK’s first dedicated migration museum and to tell the story of movement into and out of the UK in a fresh and engaging way. Everyone in this country has migration stories in their family, as an immigrant or emigrants. I believe that exploring these stories through exhibitions and oral history can contribute to a more informed and humanised debate about migration. Since 2009, the Migration Museum Project has come far and we now employ paid staff and have put together a number of touring exhibitions. A permanent base is the next step.

I worked at the Family and Childcare Trust  between 2010 and 2016, where I was head of research and policy and worked on a number of issues which presently includes childcare reform. Since June 2016 I have been Director of Strategy and Relationships at British Future. The organisation is a non-partisan think tank which seeks to promote debate on migration, integration, identity and opportunity. Its over-arching aim is to work for a confident and welcoming Britain, inclusive and fair to all.

I am also proud to be a trustee of Lewisham Refugee and Migrant Network, a local charity providing practical support to vulnerable migrants.

Family life is important to me and I enjoy spending time with my two sons, Emil and Izzy. They are on the cusp of adulthood now: a sixth-former and a university student. I enjoy cooking, walking, sunshine, sea and landscapes. I make pots in my spare time. I also write – I am a contributing editor on a political blog called Left Foot Forward.

Since finishing Moving up and getting on, I been thinking about my next big writing projects. I have three ideas in development. I have started writing a book about clay, ceramics and the experience of ‘making’, developing some of the writing on this website. Watch this space!